Outer Banks Fishing Report Please send all questions and pictures to [email protected]. We’ve recently received notice that customer emails have not been received. If you’ve provided recent catches and they have not been posted, please try resending.

As mentioned previously, we will continue to release updated reports, particularly as the conditions change. We’ll return to posting daily in the Spring.

Surf Fishing Report: Winds have remained moderate for the last few days with a good variety of fish being caught from the surf. Current conditions are ESE at 6-7 knots with the wind picking up to 16 knots around 11:00pm and lasting until late Wednesday before things improve for both Thursday and Friday. Quality Puppy Drum, Black Drum Sheepshead and Trout are continuing to be reported from Kitty Hawk all the way to Hatteras and being caught on fresh cut mullet and shrimp.

Sound Fishing Report: The Little Bridge on the Nags Head/Manteo causeway continues to have finicky success with some fishing at just the right time and reporting success while at other times all on the bridge have struggled. Both kayakers and boaters fishing on the west side of Wanchese/Manteo and around the marinas are reporting a very good striper bite with both trolling and casting heavy Rat-L-Traps.

Inshore: both Sea Bass and Albacore catches have been reported from visiting customers who have been happy with recent charter trips.

Outer Banks Fishing Report . With the season beginning to slow, updates from our fans are quieting but we’ll continue to provide updates as information is passed along. Please look to see reports begin to occur on an every-other-day basis.

Surf Fishing Report: Winds cool and breezy this morning with tough beach conditions for those looking to hold bottom rigs in place. Winds are NNE between 13-15knots. Conditions will improve greatly this afternoon and throughout the week.

Today’s afternoon winds should settle to 6 knots and shift to ENE.

Sound Fishing Report: The Little Bridge on the Nags Head/Manteo causeway has had spotty success with puppy drum and trout.

Inshore Boats/nearshore Report: Boaters and kayakers are reporting some success of Stripers in the Manns Harbor bridge area.

Outer Banks Fishing Report . Surf Fishing Report: Winds are light and variable this morning with water temp 61 and clean water with solid trout fishing all along the beach and drum still being caught with fresh cut and finger mullet.  Majority of trout catches are occurring on soft plastics and mirrolures with nice citations being caught throughout the week. Sound Fishing Report: The Little Bridge on the Nags Head/Manteo causeway reported having a good a continued run of trout with stripers being caught in nearby areas from boaters. Pier Fishing Report: Inshore Boats/nearshore Report: The inshore fisherman are continuing to catch good numbers of Striper and Puppy Drum near the inlet while Drum and Trout fishing continues to be outstanding within the sound.  Additionally, good Kingfish bites has been occurring further south down towards Hatteras. The Miss Hatteras has had great luck throughout the week. Offshore Boats Report: The fleets are routinely returning with nice catches of Yellowfin, Wahoo and Black fin.

Surf Fishing Report:
We are starting the week with one of our perfect Outer Banks days and it is suppose to last through Sunday. How lucky are we? The wind is NW my favorite for catching Drum. Just find a good slough and drop a line. Drum are bottom feeders and they will take most anything you throw at them. Having said all that I was just told the water is really murky this morning.
The point had lots of Shark and they were also scattered up and down. Sea Mullet was on the north side of the Island and Bob Pittman had a beautiful catch of nice size Mullet. I would love to have some of those buggers. Drum and Bluefish were caught as well. We had beautiful Trout and Drum on this side of the Inlet. Also some Bluefish, Black Drum, Sea Mullet.

Sound Fishing Report:
The Little Bridge on the Nags Head/Manteo causeway reported having a good run of Trout with some anglers catching their limits.

Offshore Boats Report:
The fleet manage to to get backed to catching meat fish, Yellowfin, Wahoo and Black fin.

The winds are NWE at 10 and the water temp is 64 degrees. Sunny, light winds, small choppy surf. 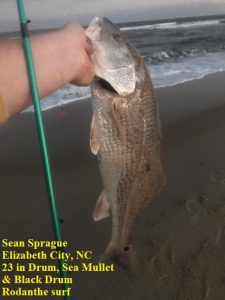 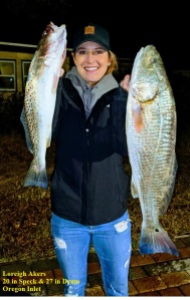 Surf Fishing Report:
Hatteras Island reported Sea Mullet in the Buxton area. Lots of shark at the point with some puppy Drum. Ramp 55 had Puppy Drum. This side of the bridge Trout, Drum And Black Drum were biting. Kitty Hawk was the hot spot.

Inshore Boats/nearshore Report:
Trout fishing is good in the sound.

The winds are SE at 14 and the water temp is 64 degrees. Mostly sunny, breezy, small choppy swells. 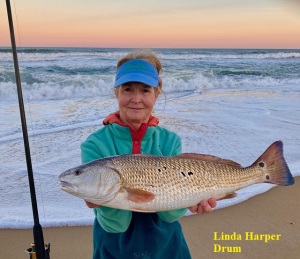